In addition to providing age estimates, otoliths (also known as earbones) have been used for other purposes such as reconstructing environmental or diet history, identifying nursery origin or stock, providing information on migration, or growth rates for various fish species.  Otoliths can also be used to identify fish species in stomach contents of other fish or mammals. The IPHC has collected Pacific halibut otoliths for age determination since the 1920s, and has also conducted several research projects using other information contained in otoliths.

The presence or proportion of various elements in otoliths can provide information about the environmental conditions experienced by the fish. Aspects of otolith chemistry have also been used to validate aging methods.

Ideally, oxygen isotope analyses can be used to reconstruct thermal history, and stable isotope analyses (carbon and nitrogen) can provide information on a fish’s dietary history. Trace elements in the otoliths can be used in conjunction with other sampling to identify nursery origin by analyzing the trace element composition of the core. Analyzing trace element composition or stable isotope levels over time within an otolith (by sampling material from sequential annuli along a transect of a sectioned otolith) can provide useful information for understanding migration.

IPHC researchers have conducted studies to evaluate the feasibility of using trace element signatures (otolith elemental fingerprint, or OEF) in juvenile Pacific halibut otoliths to identify nursery origin (Loher and Wischniowski 2005) and compared isotope ratios between the eyed and blind side sagittal otolith (Loher et al. 2008). Results from the OEF pilot study indicated differences in elemental signatures among regions, especially between the Bering Sea and western Gulf of Alaska; however, there were difficulties reproducing results, possibly due to sample contamination or limitations of the testing equipment. Loher et al. (2008) found significant differences between isotope levels between the right (eyed-side) and left (blind-side) sagittal otoliths, suggesting that the blind and eyed-side otolith cannot be used interchangeably in isotope studies. Otoliths from recovered tagged Pacific halibut were used in stable isotope studies looking at migration (Gao and Beamish 2003a) and temperature history (Gao et al. 2000, Gao and Beamish 2003b). Analysis of individual summer growth zones from otoliths of fish tagged in Alaska and recovered in British Columbia showed changes in δ18O between summer zones that supported the temperature changes the fish would experience during migration (Gao and Beamish 2003a). Similarly, δ18O values in otoliths from Pacific halibut collected during two different time periods supported evidence of regime shifts in 1977 and 1990 (Gao et al. 2000, Gao and Beamish 2003b). 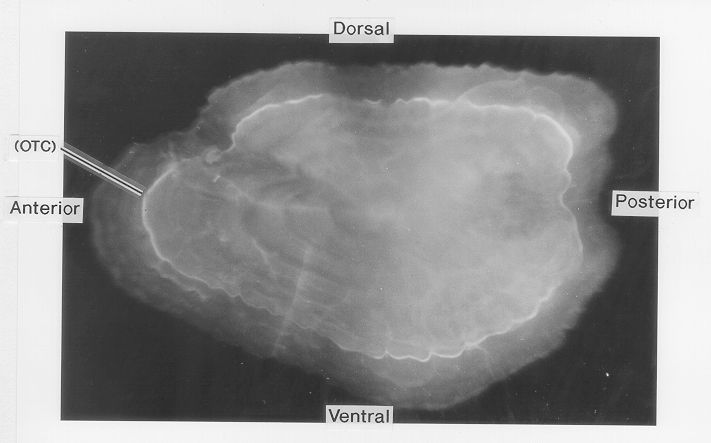 Figure 1a: OTC fluorescing marker viewed on the otolith surface

Otolith chemistry can also be used to validate age determination methods. In the early 1990s, researchers began using levels of “bomb radiocarbon” to validate fish aging techniques. The radiocarbon produced by atmospheric testing of atomic bombs in the 1950s and 1960s was incorporated into the ocean and then into the otoliths of fish in proportion to levels present in the seawater. Otoliths of Pacific halibut collected before, during, and after the period of bomb testing were used to construct a bomb carbon chronometer, which has been used to validate Pacific halibut ages as well as ages of other long-lived fish species in the northeastern Pacific Ocean and the Bering Sea (Piner and Wischniowski 2004, Kastelle et al. 2015, Wishniowski et al. 2015).  Other methods of validating age using otolith chemistry are radiometric validation, which measures the ratio of lead (Pb-210) to radium (Ra-226) in the otolith, and chemical marking of otoliths in fish that are then tagged and released.  With chemical marking, the chemical is incorporated into the otolith after it is introduced into the fish by either injection or immersion, creating a distinct mark on the otolith (Fig. 1a, Fig. 1b). After a fish is recaptured, the number of annual growth rings observed after the chemical mark is compared with the number of years the fish was at liberty. Pacific halibut otoliths have very low levels of lead and radium, so it was not possible to validate Pacific halibut ages using this technique (Kastelle and Forsberg 2002). An oxytetracycline (OTC) validation experiment conducted on Pacific halibut was inconclusive, as many of the fish in the study were tagged and marked at the time the annulus was being deposited. Readers had difficulty determining which side of the annulus the OTC mark occurred, leading to a possible 1-year error in the count of annuli deposited after the mark (Blood 2003). 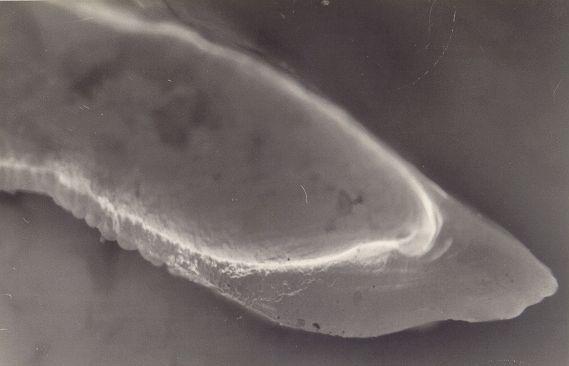 Otoliths collected from Pacific halibut by IPHC for age determination have been soaked and stored in a glycerin/thymol solution. Glycerin solution enhances contrast between growth zones, enabling age determination; however, it renders these structures unusable for elemental analyses. To make structures available for future chemical analyses, a separate “clean” otolith collection was initiated in 2010. New otoliths are added annually.

For a period of 28 years (1962-1990), the IPHC used measurements of otolith size (radius, length, and weight) to estimate the fork length of Pacific halibut sampled in the commercial fishery (Fig. 2). Estimating fish size from otoliths increased sampling efficiency since samplers did not need to measure or record data for individual fish. Changes in the otolith/body size relationship over time led to the resumption of measuring individual fish in commercial catch samples in 1991 (Clark 1992).  Additional studies have been done on measurements between annual growth rings within individual otoliths (increment analysis).

Differences in otolith shape have been used in other fish species to distinguish between stocks. IPHC attempted to use otolith shape to discriminate between male and female Pacific halibut (Forsberg and Neal 1993). In the commercial fishery, Pacific halibut are delivered with internal organs removed and there are no external distinguishing characteristics between the sexes. Knowing the ratio of males to females would provide valuable information for the stock assessment. IPHC age readers have observed differences in otolith shape between males and females (male otoliths tend to be more oval in shape, while female otoliths are more triangular); however, the results of this study were not accurate enough to be useful in predicting sex.