Each year since 2009, the International Pacific Halibut Commission (IPHC) has deployed water column profilers at more than 1,200 fishery-independent setline survey stations coastwide from northern California to the Gulf of Alaska and into the Bering Sea and Aleutian Islands.  An estimated 11,876 successful water column observations have been collected through 2018.

IPHC scientists recognized in the late 1990s that monitoring environmental conditions coincident with catch might eventually contribute clarity to the stock assessment and aid in the evaluation of harvest strategies. This step seemed particularly important given that the effects of climate change were already being documented around the globe (IPCC 1995), and baseline environmental data for North American continental shelf bottom habitats were extremely limited.

Technological advancements allowed for the development of affordable, practical instrumentation that could be deployed from a fishing vessel, specifically water-column profilers which can be deployed from the deck of a vessel and descend to the bottom, collecting data throughout the water column. The IPHC used these advancements to implement a program where environmental data are collected alongside species catch data during the IPHC fishery-independent setline survey (FISS), so that near-bottom readings directly reflect the environmental conditions fishes are experiencing.

In 2000, a water-column profiler (model SBE19), manufactured by Sea-Bird Electronics (now Sea-bird Scientific) in Bellevue, WA, U.S.A., was purchased for deployment on the FISS. The goal was to test the unit, but also to test its use on the deployment platform (a chartered longline fishing vessel) to ascertain whether deployment could be accomplished with minimal disruption to the other operations. During the first year, successful profiles were made at 120 out of a possible 130 stations and the pilot test was considered a success. For the next several years, the profiler was successfully deployed on board a variety of FISS vessels and in different areas.

In 2005, the IPHC added a dissolved oxygen sensor (SBE 43) to the existing profiler for two reasons:  1) to test how well the SBE 43 fared under survey conditions and 2) to study the extent of hypoxic sea bottom areas, which had been documented off the U.S. West Coast annually since 2002. Unfortunately, a factory malfunction of the SBE 43 instrument in that year rendered the data unusable, but the sensor itself proved as sturdy and easy to work with as the base unit. Sea-Bird Electronics made the necessary repairs and the sensor was deployed successfully the following year.

In 2007, the IPHC received a grant for $26,000 from the Oregon Department of Fish and Wildlife (ODFW) Restoration and Enhancement Program for the purchase of one profiler to be deployed off the West Coast. By this time, Sea-Bird Electronics was manufacturing an updated model, the SBE19plus, which collected four measurements per second, instead of two, and allowed additional auxiliary sensors. IPHC purchased a unit complete with auxiliary sensors to measure dissolved oxygen (SBE 43), pH (SBE 18), and fluorescence (WETLabs ECO-FLRTD).

The ODFW grant paved the way for a much larger grant received from the National Oceanic and Atmospheric Administration (NOAA) in late 2008 for the purchase of 14 profilers, 14 companion laptops, and four years of operating and data processing costs. This grant allowed the expansion of the profiler project to extend to all vessels and areas surveyed by the IPHC during the FISS (Fig. 1). IPHC purchased the latest model profilers (SBE19plusV2) equipped with auxiliary sensors for dissolved oxygen, pH, and fluorescence (Fig. 2).  The project was launched coastwide in 2009.

After the NOAA grant expired in 2012, the IPHC decided to continue the project indefinitely and now bears the costs of instrument and gear replacement as needed, annual calibration, shipping, and data processing. Additional information on the IPHC profiler program can be found in Sadorus et al. (2016). 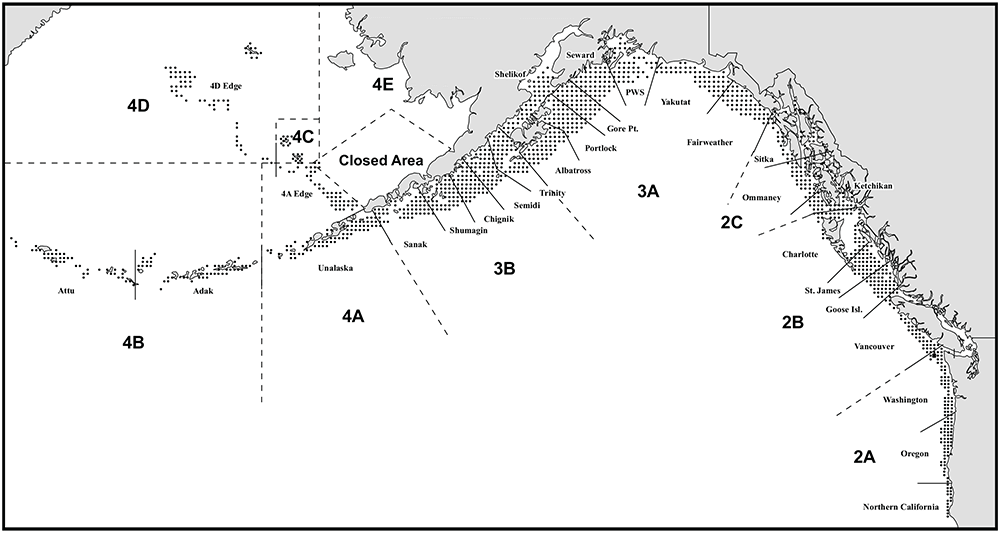 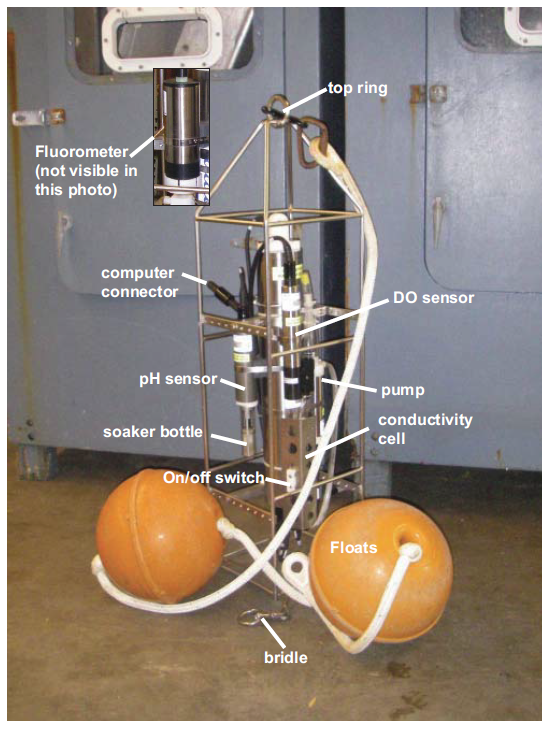 A facet of the original NOAA grant was making the profiler data available to researchers worldwide. IPHC partnered with NOAA’s Pacific Marine Environmental Laboratory (PMEL) and the Joint Institute for the Study of the Atmosphere and Ocean (JISAO) to process and publicly post the annual data sets during the grant period. This partnership will continue through processing of the 2016 data. The posted datasets will remain available at the following link until further notice. For the 2017 and subsequent datasets, the IPHC will pursue other avenues for processing and posting. Publically available profile data currently include text and NetCDF versions as well as maps, metadata, and project information:

In addition to the processing of full profiles, the IPHC maintains a database of the temperature and dissolved oxygen bottom readings, i.e. the deepest readings from each profile which are estimated to be 5-15 m off bottom. These data are available upon request. To request these data, visit the Data/Data Request tab on the IPHC website.

Fishery management generally focuses on age-class and length-class determinations along with removals from the stock as the primary means of predicting how many fish are available for harvest.  Managers know that commercial catches can vary temporally and spatially based on a variety of factors, and are becoming increasingly aware of fluctuating oceanographic conditions and their impacts on fishes. It has been shown through recent studies (e.g. Sadorus et al. 2014, Hurst 2007, Keller et al. 2010, Prince et al. 2010) that environmental factors affect the behavior, distribution, and fitness characteristics of marine organisms.

Additionally, results from FISS and commercial catch monitoring may be affected by varying oceanographic conditions that induce changes in animal behavior. There is evidence to suggest that both temperature and low dissolved oxygen (Stoner et al. 2006) affect the feeding behavior of Pacific halibut which, in a longline survey setting, may impact how Pacific halibut react to the baited gear (Sadorus et al. 2014). Knowing how oceanographic variables affect animal response to the fishing gear is imperative to interpreting these data accurately.

Currently at the IPHC, near-bottom profiler data are in the process of being incorporated into a spatial model being developed for the Pacific halibut stock assessment. This requires analyses of various FISS-related metrics such as weight-per-unit-effort, numbers-per-unit-effort, and sex and age compositions in relation to environmental variables.

Pacific halibut are found across a large geographic area during the FISS which encompasses a wide range of oceanographic properties and environmental systems. Relative to the other areas, British Columbia and the U.S.A. west coast near-bottom Pacific halibut habitat is characterized by higher temperatures, lower dissolved oxygen, lower pH, and higher salinity. The Gulf of Alaska tends to experience cooler temperatures, higher dissolved oxygen, higher pH, and lower salinity than the west coast region. In the Bering Sea, Pacific halibut are found over a broad area from inner Bristol Bay to the shelf edge, but in most years, the survey covers only the shelf edge and habitat around the Pribilof Islands and St. Matthew Island as well as both the north and south sides of the Aleutian Island chain (Fig. 1). The monitored habitat is characterized by much cooler temperatures, high dissolved oxygen concentration except at very deep stations, pH similar to the Gulf of Alaska (but higher than the west coast), and intermediate salinity, i.e. lower than the west coast region but higher than the Gulf of Alaska. A particularly noteworthy observation of near-bottom waters in recent years is illustrated in Figures 3 and 4. Figure 3 shows the average near-bottom temperature (oC) over the observed period (summer 2009-2018). Figure 4 is an animation of temperature differences from the average for each year using Figure 3 as the baseline. Note that the scale for the figures is color coded and located to the right of the figure. 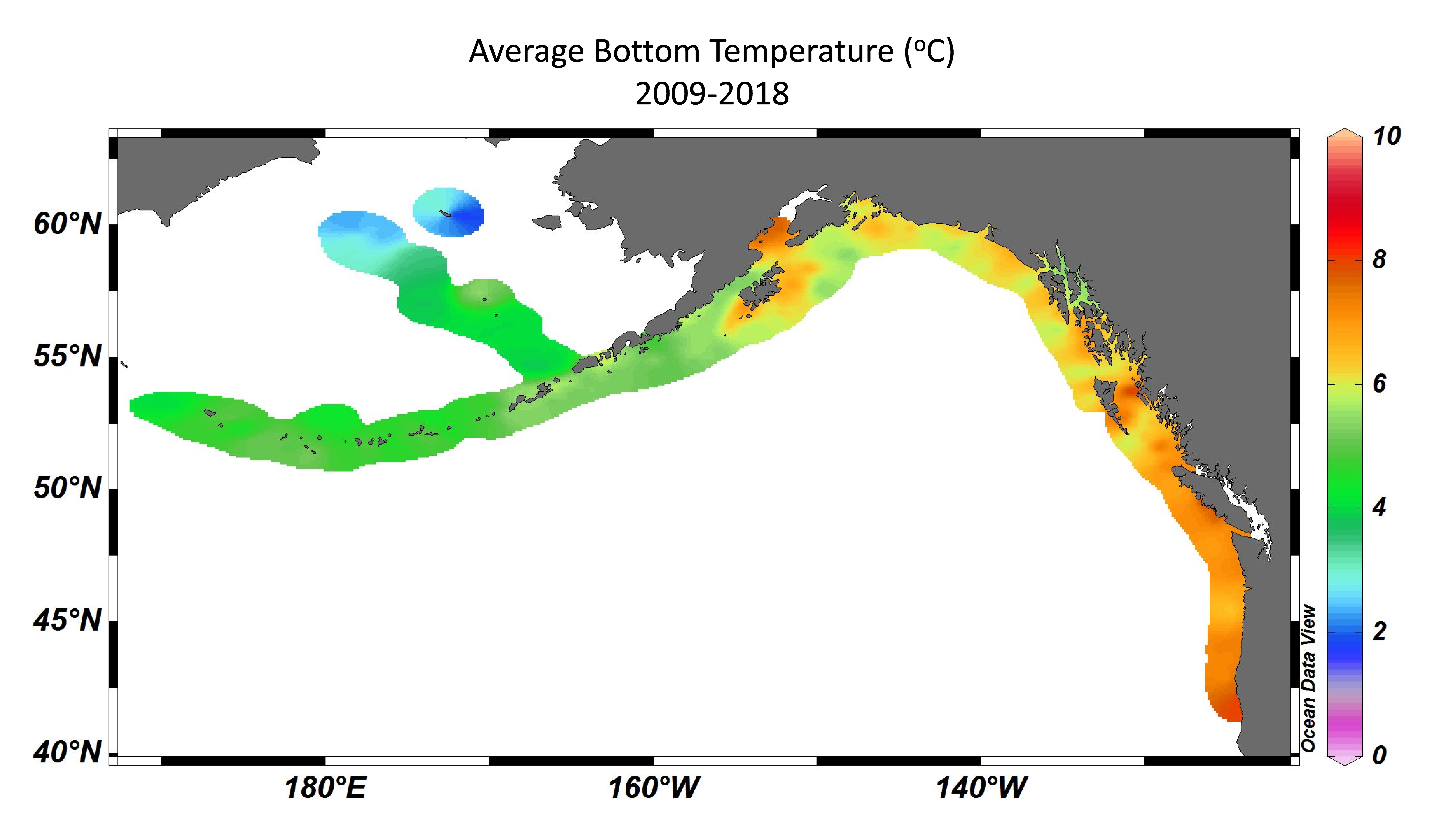 Over time, three profilers have been lost at sea during FISS operations. The IPHC is offering a reward for the recovery and return of the instruments.